It’s been a couple of weeks and I feel it’s time for a little update on the Skyline restoration I have been consumed with lately. When we last left off HERE, I had formed a replacement A-pillar skin to replace the one that was in the process into rusting into oblivion. Now that I have the replacement, it’s time to cut out the old one. The first step is figure out exactly what needs to be cut out and mark it. As you can see in this picture, the replacement part actually required me to weld 2 separate pieces together due to the length of the affected area. Rather than just randomly weld them together I did some careful measuring to figure out were the factory seam was to make it look as OEM as possible and connect it there (you will see it a few pics down). Also note the slight curvature of the A-pillar.

Once you have that, trace it over the area you need to remove.  The A-pillar consists of multiple layers of steel all spot-welded together.  The part we are replacing is only the inner skin, so to remove it first you have to locate exactly where the factory spot welds are located which can be extremely difficult when the entire area is  pitted with corrosion.  Here they are in between the yellow marks.

Now the fun part, normally I would use a drill bit specifically made for cutting out spot welds  but due to the proximity of the spot welds to the curve in the A-pillar it wouldn’t quite fit.  This required another method for removing sport welds which involves very precise grinding with a cutoff  wheel to remove ONLY the outer layer.

And you can then separate the outer layer and if you’re careful there shouldn’t be any marking on the panel underneath.  It actually looks pretty bad under there in the picture but fortunately we caught it early enough that it was only very light surface rust from the layer above that could be easily removed and treated.

At this point you can see the portion above the seam towards the top that still needed to be removed. 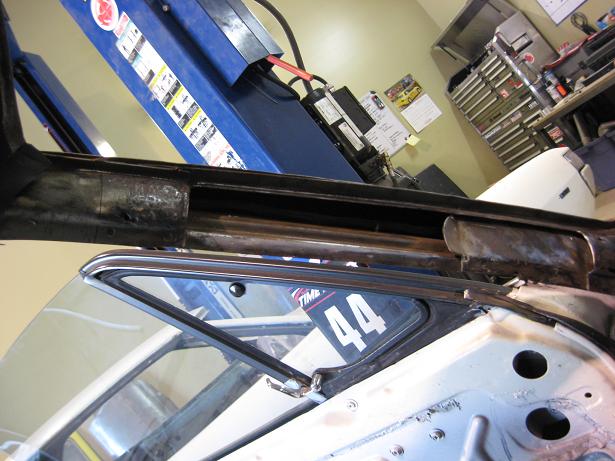 There was also a unfortunately a section towards the bottom that still needed to be removed as well.   I thought it looked angry so I added eyebrows and nose holes with my amazing paint shop skills to complete the picture and make it look more like the nasty little monster that it really is.   These are the kind of monsters I have nightmares about.

Here’s what it looks like after removing all the affected areas, treating them, and then spraying a weld-through primer to make sure the monster never returns again.

The bottom portion was very tricky to reproduce as it combined the A-pillar form on top and then transitioned to a more flat surface.

It’s now time to bust out the MIG and go some welding.  Here you can see I started with the tom section first.

For the bottom potion I wanted to match the look of the factory spot welds as much as possible so I measured the spacing on the driver’s side.

The best way I have found to reproduce the look of the factory spot-welds without having a crazy expensive spot welder is to drill a hole only on the out layer the same diameter of the OE spot welds.    Also note that I made the bottom of the skin extra long so it could be cut flush with the other panels when finished.

And the finished weld looks just like a spot weld and also has the same affect of connecting the outer panel to the inner one.

Here’s everything tacked into place.

Because I was attaching the outer panel to the original good metal  up top, it meant that this area would have to be fully welded and ground down to achieve a factory finish.  It starts with lots of small tack welds to spread out the heat and prevent any warpage that may occur.

And ready for paint.

Now onto the driver’s side that wasn’t nearly as bad but still required a few small patches.

There was still a little minor pitting but the remaining areas still had good strength and could be converted after removing all of the surface rust, neutralizing and sealing it.

Time for some patches.

And smoothed.  In this picture you can see the seam on top that I re-created on the passenger side.

It’s now time for some more Zero Rust and primer…..   looks pretty original if you ask me

I’m not sure why I spend so much time on a part that will be covered up anyways but it’s just the way I am.  I hope  our customers value a quality repair as much as I do.

Here’s the aftermath of what was removed.

The window frame area also needed a bit of work before I took it down to paint.  First up were these holes for the antenna that originally just had plastic plugs in them because the antenna was missing.  We decided for a cleaner look we would just remove them completely.

The smaller holes could be filled with the MIG welder but the bigger one needed a patch.

And after cleaning up some minor areas around the frame I think we’re ready for paint!

As I type this it’s currently at the upholstery shop receiving some new a-pillar covering as well as an entire carpet kit.  As much as I would love to do all that here I’m afraid the sewing machine is a little out of my territory…..   for now